Condor takes off with Air Namibia: Codeshare agreement begun between the two airlines 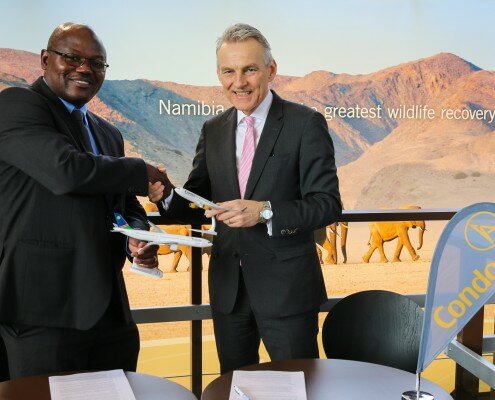 From summer 2017, lots of advantages for passengers of both airlines with daily connections and new destinations

Frankfurt am Main, 9 March 2017 – Condor and Air Namibia concluded a codeshare agreement. This agreement will allow Condor passengers to have access to daily flight connections to Windhoek from summer 2017. The twice-weekly Condor flights from Frankfurt (Mondays and Fridays) are being supplemented with flights from Air Namibia. This means that passengers can make their plans with more flexibility and chose from nine weekly connections during the summer flight plan and from seven weekly connections in the upcoming winter. From April onwards, all codeshare flights will be available with a Condor flight number and airline code “DE” through the Condor booking channels.

“With daily nonstop flights from Frankfurt to Windhoek, the cooperation between Condor and Air Namibia offers our customers additional advantages with an expanded selection of holiday destinations in Southern Africa and a continuous baggage check-in on codeshare flights,” says Ralf Teckentrup, Chairman of the Board of Condor Flugdienst GmbH. “Our existing Africa routes are being optimally complemented with the agreement so that, in addition to Zanzibar, Mombasa, Kilimanjaro, Windhoek and Cape Town, other parts of Southern Africa can also be explored on long haul flights.”

The Condor codeshare flight number will also be used on connecting Air Namibia flights within Southern Africa. This will result in passengers benefitting from convenient connections to Johannesburg, Cape Town Harare and Walvis Bay.

As part of the agreement, Air Namibia flight numbers with the “SW” code will also be offered on many routes in the Condor route network. The codeshare routes, such as in the Caribbean, to North America or in the Mediterranean, open up a selection of many new holiday destinations and connections for Air Namibia guests.

“We are happy to improve the service offering to our clients through collaboration with Condor, especially the seamless travel options via Frankfurt for onward connections to North America, the Caribbean or to the many other Condor holiday destinations result in a great added value for our guests. Before our agreement, these destinations were hard to reach for our customers”, says Advocate Mandi Samson, Acting Managing Director of Air Namibia.

In addition to codeshare flights, the two airlines will offer other complementary connections of the partner airline on their respective websites. Apart from daily direct connections to Windhoek, visitors to the Condor website can also choose flights to eight destinations in Southern Africa. The range on airnamibia.com is being expanded by many additional Condor destinations. In particular, destinations such as Minneapolis, Seattle, Austin and Barbados will enhance the Air Namibia route network.

Another alternative option for booking flights covered by this code share agreement is by calling;

Condor Flugdienst GmbH has been flying its guests to the most beautiful holiday destinations in the world since 1956. The traditional airline is a 100 percent subsidiary of Thomas Cook GmbH. On an annual basis, more than seven million passengers fly with Condor to about 75 destinations in Europe, America, Africa and Asia. The route network of the holiday airline includes over 230 destinations through cooperations with airlines in the destination areas. Condor was merged with the airlines Thomas Cook Airlines UK, Thomas Cook Airlines Belgium and Thomas Cook Airlines Scandinavia in October 2013, to form the Thomas Cook Group Airlines. All companies within the Thomas Cook Group plc. are united under a common symbol: The Sunny Heart. To express their common identity, the aircraft of the Thomas Cook Group Airlines show the sunny heart on their aircraft trails. The sunny heart also shows that Condor is putting its heart into every flight. The fleet of the Thomas Cook Group is comprised of 95 modern and environmentally friendly aircraft, of which 45 aircraft are from the Condor fleet: nine Airbus A320s, seven Airbus A321s, thirteen Boeing 757-300s and sixteen Boeing 767-300s. The aircraft are maintained by the airlines’ own technical companies. The holiday airline has won numerous awards in recent years, including the award for “Service Champion 2016” in the Gold Category.