Windhoek, 18 September: Air Namibia is proud to inform its clients that the much anticipated entry of the two brand new Airbus A330-200 aircraft into our fleet later this year will be major upgrade of our long haul inflight product.

The A330-200 offers a much improved inflight product compared to the current Airbus A340 which will leave Air Namibia’s fleet at end of 2013.

The A330-200 offers an improved overall appearance of the cabin interior, with a more spacious impression of the cabin, more headroom and shoulder clearance for window seats, as well as more headroom underneath the bins, with an improved illumination. An enhanced and spacious cabin is designed around the passenger’s well-being, while the low noise and emissions levels make flying greener and quieter.

“Across the entire cabin, both in business and in economy class, the A330-200 offers individual personal video screens for each seat, with ‘video on demand’. The video and audio on-demand concept means that the user has ability to pause, rewind, fast forward, or skip to any point in the movie,” says Paulus Homateni Nakawa Air Namibia Head of Corporate Communications.

In short, while on board, our passengers will be able to work, eat, play, relax and sleep.

Business Class
The A330 aircraft will come with 30 business class seats, and no “premium economy” class section. The soon to be phased out A340 offers recliner seats in business class, while the A330 offers full flat beds at 180 degrees and completely horizontal when reclined. Recliner seats do not offer the significant recline of the flat bed seats. The flat bed seats always receive high accolades for being comfortable both as seats and beds.

The A330 business class seats are Contour Aura Lite, which seats are designed and engineered to perform for the airline and passenger through its modular design. The Unique S-shaped outer arms yield significant space (11% more along its entire length from seat to bed) allowing for a larger centre console that houses a fully adjustable single-slab table. This seat offers a stylish, flexible approach to premium aircraft seating that provides exceptional space and facilities.

The business class seat on our A330 comes with the following features;

• IFE screen in back of seat in front, with both video and audio on demand
• Rising armrests that form individual privacy screens, when a passenger needs privacy
• Water bottle and general stowage
• Shoe stowage and literature pocket
• PC power, headphone port
• In-seat reading light (Fully adjustable to direct the light where you need it)

Economy Class
The A330-200 comes with 214 economy class seats compared to 234 on the A340. The seat pitch is an average 31 inches, which is standard in the region and offers sufficient legroom (same as in A340). With 8 abreast in the economy class, the 18 inch seat width, the A330 offers the preferred comfort standard.

The A340 video screens are retractable from the center passenger service unit and against the bulkhead, it has no individual screens.

Cargo
The A330 comes with temperature control in the cargo compartments, which enables Air Namibia to carry different types of cargo including frozen products like fish. Other products we are able to transport as cargo include flowers, live animals, fruit, appliances, vehicles, to mention a few.
Namibia exports meat and fish products, as well as other perishable goods like flowers, to the European market.

Currently, Air Namibia’s average cargo load on the Windhoek-Frankfurt route is 10 tonnes, the A330 offers a 14-tonne cargo capacity as opposed to the 16 tonnes of the A340 which is way above the current average cargo load.

Air Namibia is due to take delivery of the first of the two brand new Airbus A330-200 aircraft next week. The second A330-200 is expected to enter the national air carrier’s fleet in November 2013. The two aircraft are being leased from Intrepid Aviation for a period of 12 years.

“The A330 is the market leader with over 1,000 A330s delivered to over 100 operators worldwide. This is a popular aircraft used by a wide number of airlines, from the South to the North, east to the West, Large and Small airlines. Today, there is an Airbus A330 aircraft taking off or landing every 50 seconds,” Nakawa says. 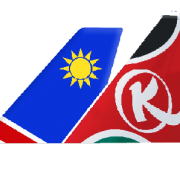 Kenya Airways has boosted its footprint within the Southern Africa region with the signing of a new code-share agreement with Air Namibia, the national carrier of Namibia.

The deal paves way for daily connections between the airlines’ Nairobi and Windhoek hubs through Johannesburg in South Africa and Lusaka in Zambia.

“We are excited about this partnership. By facilitating convenient travel for our passengers, this code-share agreement will enable us to make a contribution towards spurring sustainable development in Africa,” Dr Naikuni said.

This code-share agreement with Air Namibia brings the number of code-share arrangements that Kenya Airways has signed with other international carriers to 20.

Ms Namases, said: “The industry we operate in is highly competitive and dynamic. Only smart and efficient airlines will survive. Gone are the days of – I can do it alone. As African airlines we need to realize that smart partnerships are the way forward, and the key to sustainability and survival”.

Namibia is one of the most stable democracies and economies in Africa with a GDP per capita of USD 7800. It currently benefits from large investment projects in its mining industry, a key driver in the country’s economy.

The new code-share services between Air Namibia and Kenya Airways went on sale on the June 20, 2013.

Founded in 1977, Kenya Airways is a member of the SkyTeam Alliance and a leading African airline. The pride of Africa fly’s to 59 destinations worldwide, 47 of which are in Africa carrying over three million passengers annually.

Kenya Airways has a modern fleet of 42 aircraft. With an order of 31 aircrafts over the next 3 years of which 9 are 787 Dreamliners, KQ is one of the fastest growing carriers in the African continent.

Kenya Airways takes pride for being in the fore front of connecting Africa to the world and the World to Africa through its hub at Jomo Kenyatta International Airport.